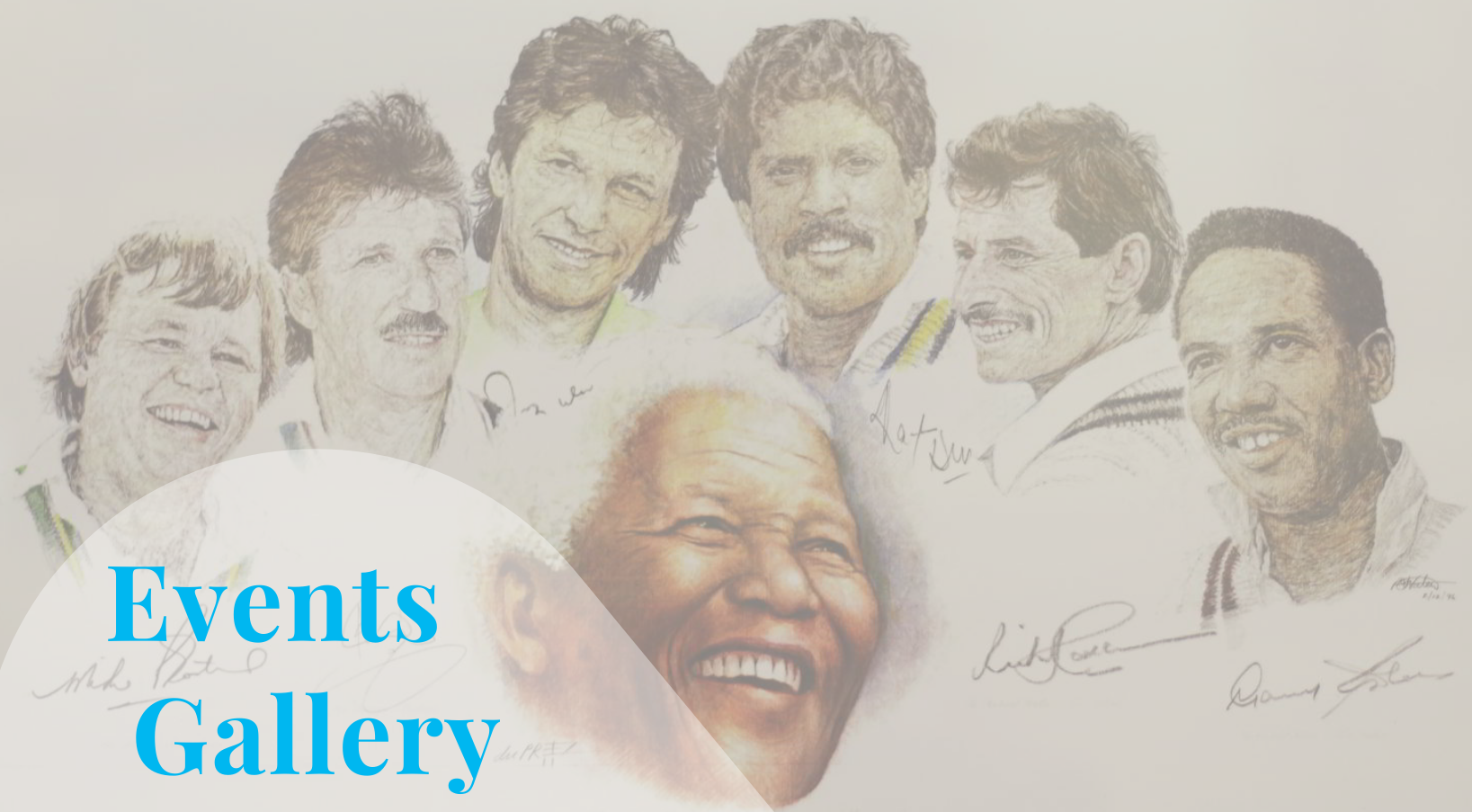 Welcome to our events gallery, where you can catch up on our previous events and see what events we have coming up.

Plans are currently being drawn up for events in 2023.  Mike will likely be in the UK for part of June and the whole of July although his dates are yet to be confirmed.  All of these events are in the planning stage, when we are able to confirm them, we will provide full details here on our website.

We had an “event-full” time in 2022, starting at Old Trafford in early May with a 50th anniversary dinner to celebrate the iconic Gillette Cup semi-final match in 1971 between Lancashire and Gloucestershire with the game famously ending in near darkness.  More details on this are below and a souvenir video has been produced of the night.  This is in the form of a USB stick in a smart presentation box and is available for just £15 with all proceeds going to the MPF.  These can be purchased by emailing our team at mpfenquiries@mikeprocterfoundationuk.org.

No review of 2022 would be complete without a special thanks to our friends at Lancashire Youth Foundation – Gary Porter, Phil Ascot and Peter Young and Gary’s team at Old Trafford without whom the event in May would not have happened.  Also special thanks to Derek Calrow OBE in Lancashire who has supported the Foundation generously and tirelessly over the past few years.

See below for further details of the specific events that took place in 2022. 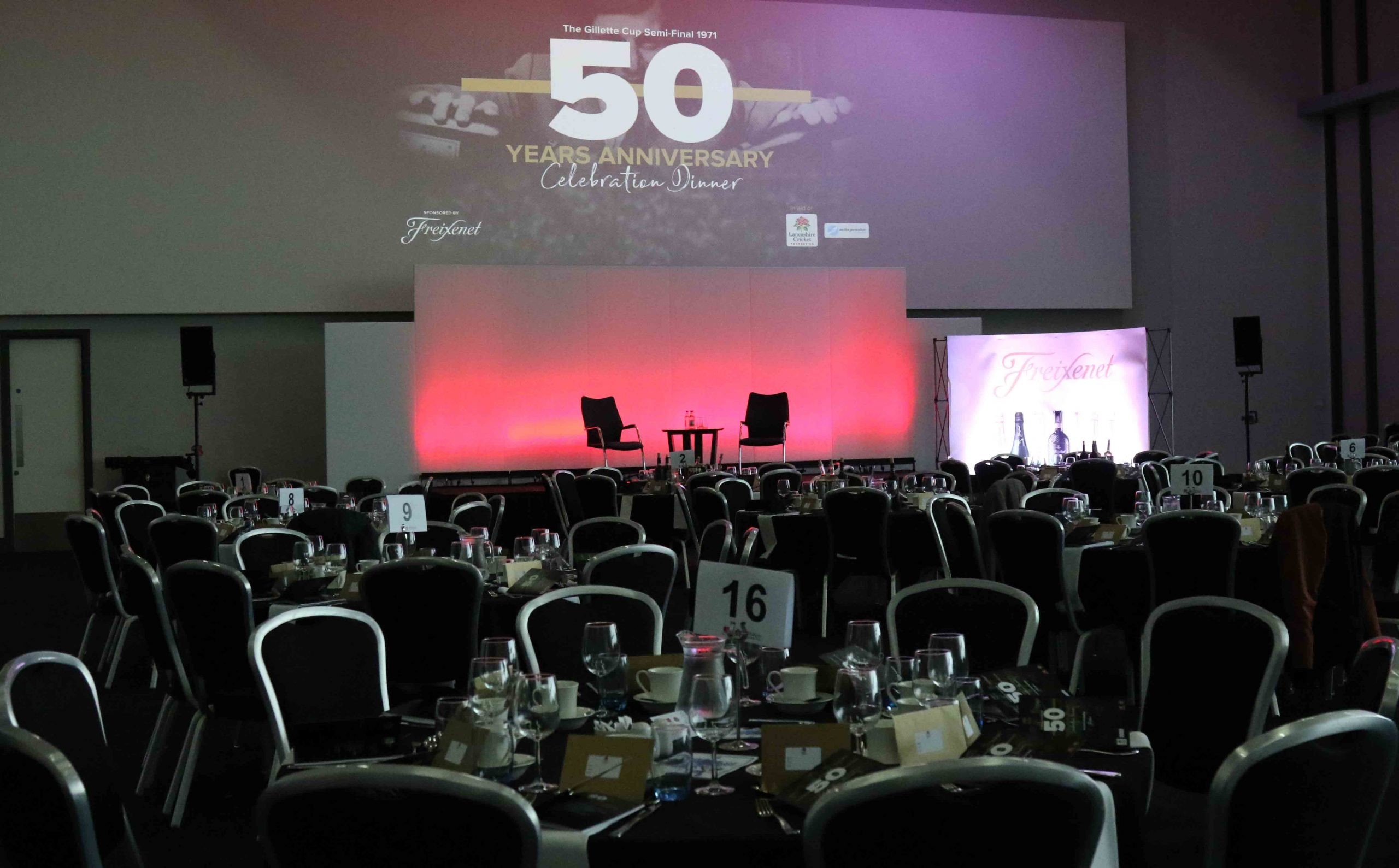 A 50th Anniversary dinner was held at the Emirates Old Trafford to celebrate the past and invest in our future by remembering the 1971 semi-final between Lancashire and Gloucestershire.

Limited Edition – Purchase a copy of the limited edition souvenir video of the event for £15 by emailing us at mpfenquiries@mikeprocterfoundationuk.org. All proceeds will go to the MPF. 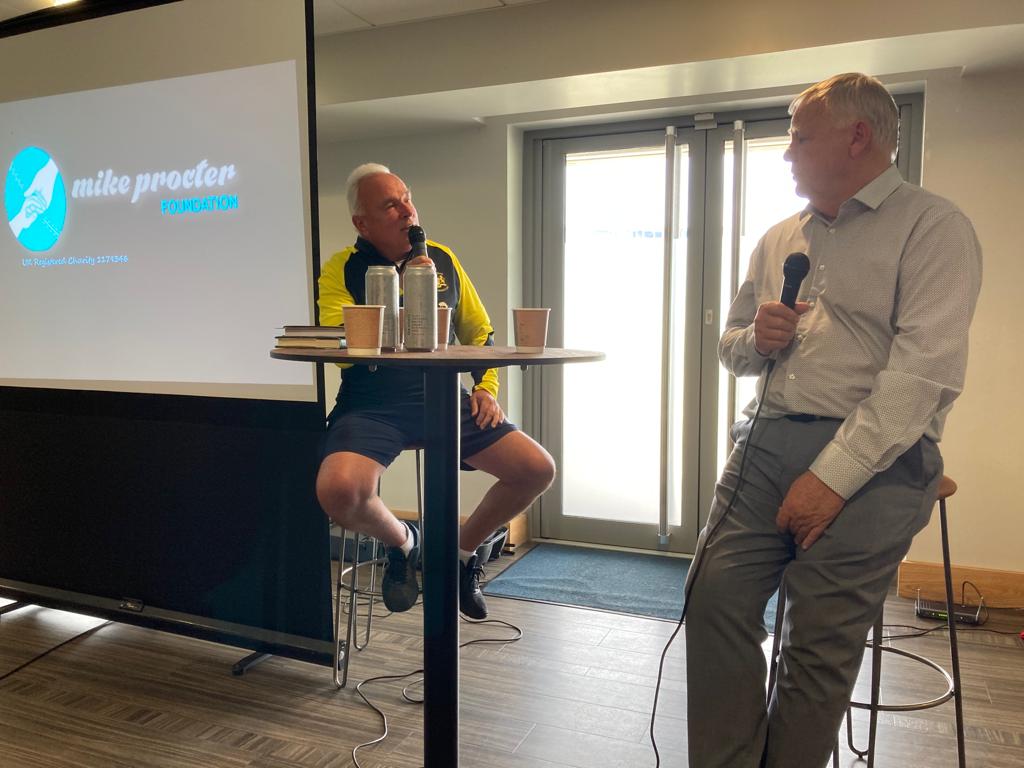 Mike Procter was the guest speaker on Wednesday 29th June at the “Walkers & Talkers” event, the new initiative organised by Andy Brassington the former Gloucestershire CCC wicket keeper and owner of Bristol events company “Finders Keepers”, who is known to one and all as Brassy.

The initiative aims at getting people together each week at Gloucestershire’s County Ground in Bristol for a relaxed natter over coffee and a stroll around the boundary before listening to a guest speaker in the pavilion.

Invariably an entertaining and informative morning is assured from speakers who willingly give their time for nothing.

Mike would like to thank “Brassy” for his great initiative and for inviting him to speak.  The Foundation wishes him every success with this simple but powerful initiative to bring people together and would encourage others to come along on a Wednesday at 10am.

This event was organised by the Cricket society to raise funds in support of the MPF. A large audience listened to Mike being interviewed by broadcaster and hugely enthusiastic  cricket fan, Mark Church.  Our thanks as ever to the Cricket Society who provided great support to the Foundation during the pandemic and especially to Nick Tudball and Nigel Hancock, who made the event happen.  Awaiting pictures 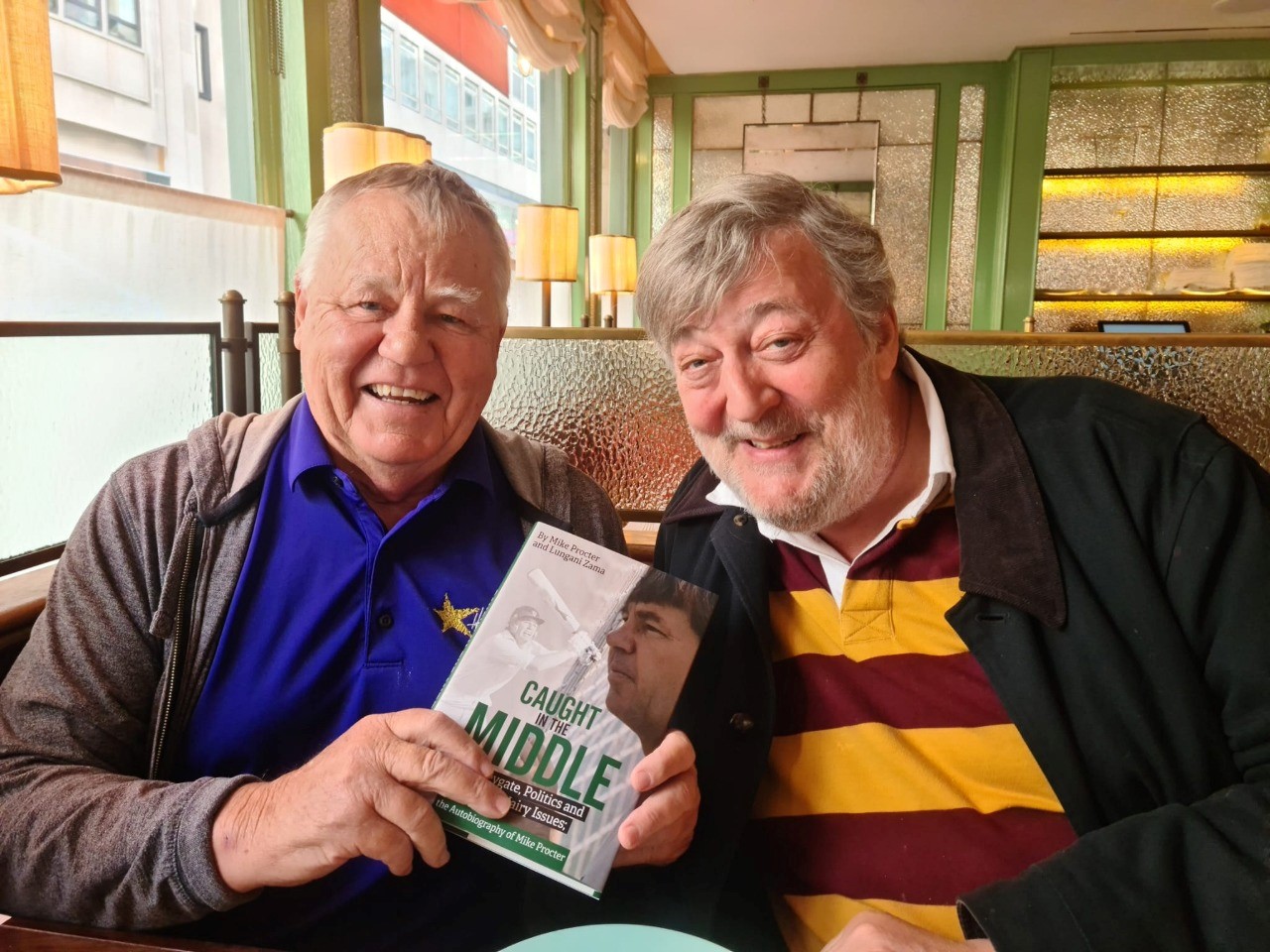 May – Stephen Fry Meets his Idol

Mike attended an afternoon tea in London as the guest of one of his self-confessed greatest fans, the actor, “national treasure” and now President of the MCC, Stephen Fry. 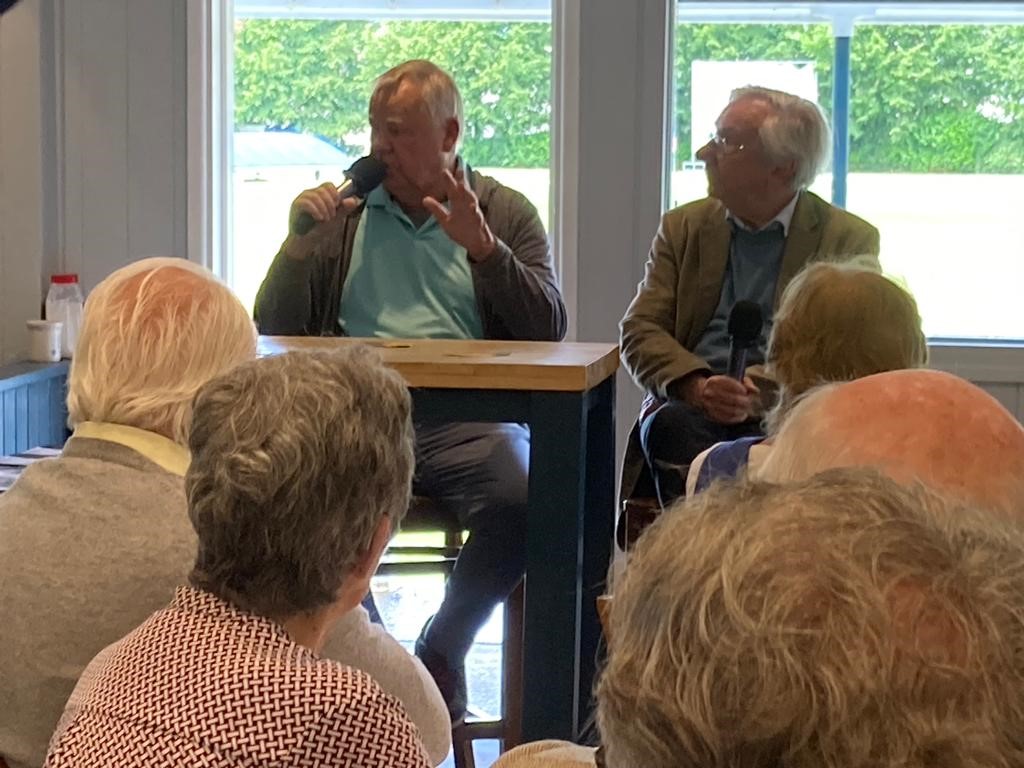 In early July, Lansdown CC in Bath hosted a fundraising lunch with Mike Procter where the renowned cricket writer and historian, Stephen Chalke interviewed Mike for over an hour on the back of a superb lunch provided by our hosts.  The questions and anecdotes flowed as quickly as the wine and a great afternoon was had by all.  The only dampener on that day was the weather which prevented the Division 1 match between Lansdown and Taunton St Andrews to start until very late in the afternoon by which time, most of the guests had departed.  Our huge thanks to Scott Longstaff and his colleagues at Lansdown CC for a memorable day. 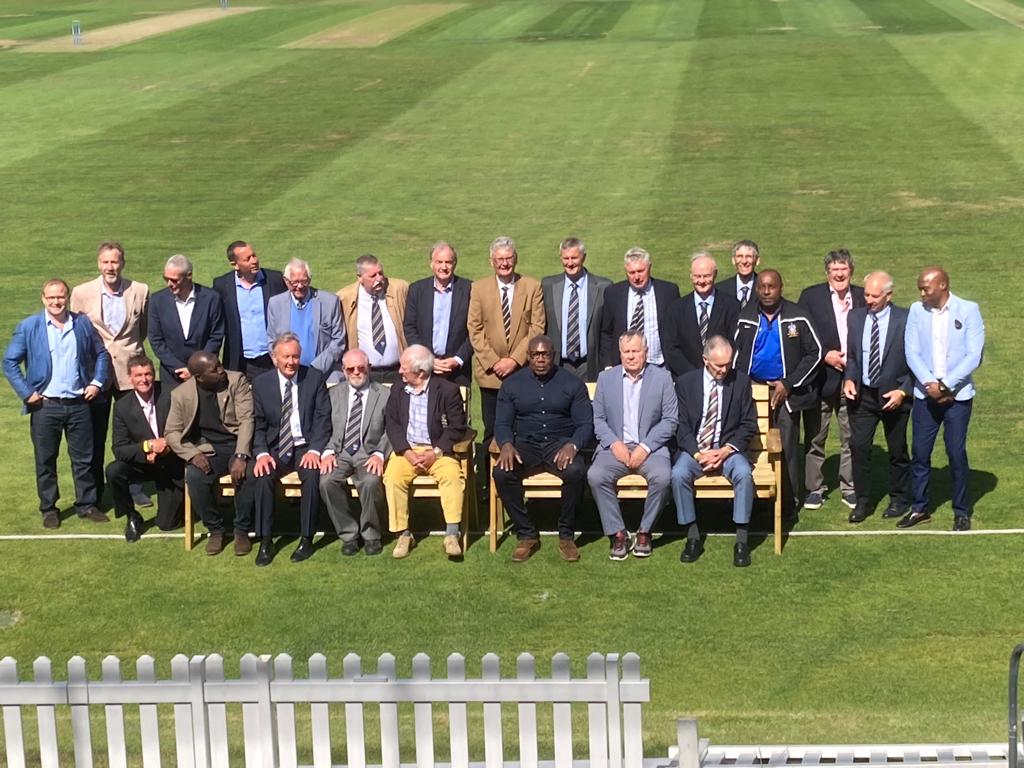 On Sunday, Mike joined over 20 former Gloucestershire cricketers for their annual lunch and reunion.  This was hosted by Gloucestershire CCC and organised by their former wicket keeper, Andy Brassington.

An excellent lunch was served, wine and beer were consumed in copious quantities and stories, jokes and memories were shared.  Some even managed to rouse themselves sufficiently to see Chris Dent complete his century in the County Championship match against Lancashire that was being played!!!

The group photo is a reminder to Gloucestershire supporters and cricket lovers everywhere of the cricketing talent that has performed in the colours of the “Shire” over the years.  Players there included the oldest surviving player Roy Swetman, who is 88 years young, England stars David (Syd) Lawrence and Mark Alleyne together with Chris Broad who is now an ICC referee and of course is also Stuart Broad’s father.

A tree was planted as a tribute to those former players who have sadly passed on, and photos were taken.  The group photo shows those were able to make the day. 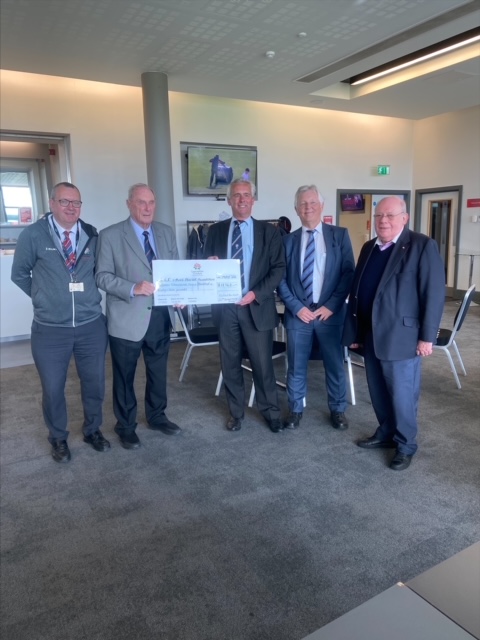 They were there to receive a cheque for £11,763 as the Foundation’s share of the proceeds from the hugely successful dinner event in May to celebrate the 50th anniversary of the iconic Gillette Cup semi-final match at Old Trafford in 1971, in reality almost the 51st anniversary thanks to Covid!!

Lancashire legend, Jack Simmons who played such a key role in Lancashire’s victory in 1971, was delighted to present the cheque to Nick who is the Foundation Treasurer.  Jack quipped with mock irritation that he was in line to win the man of the match award until David Hughes scored his memorable 24 runs off Gloucestershire spinner John Mortimore’s final over to win the match for Lancashire.

Mike Procter would like to thank Gary Porter and his team at the Lancashire Cricket Foundation for all their hard work in making the event the great success that it was and he and his Foundation look forward to working with them again in the future. 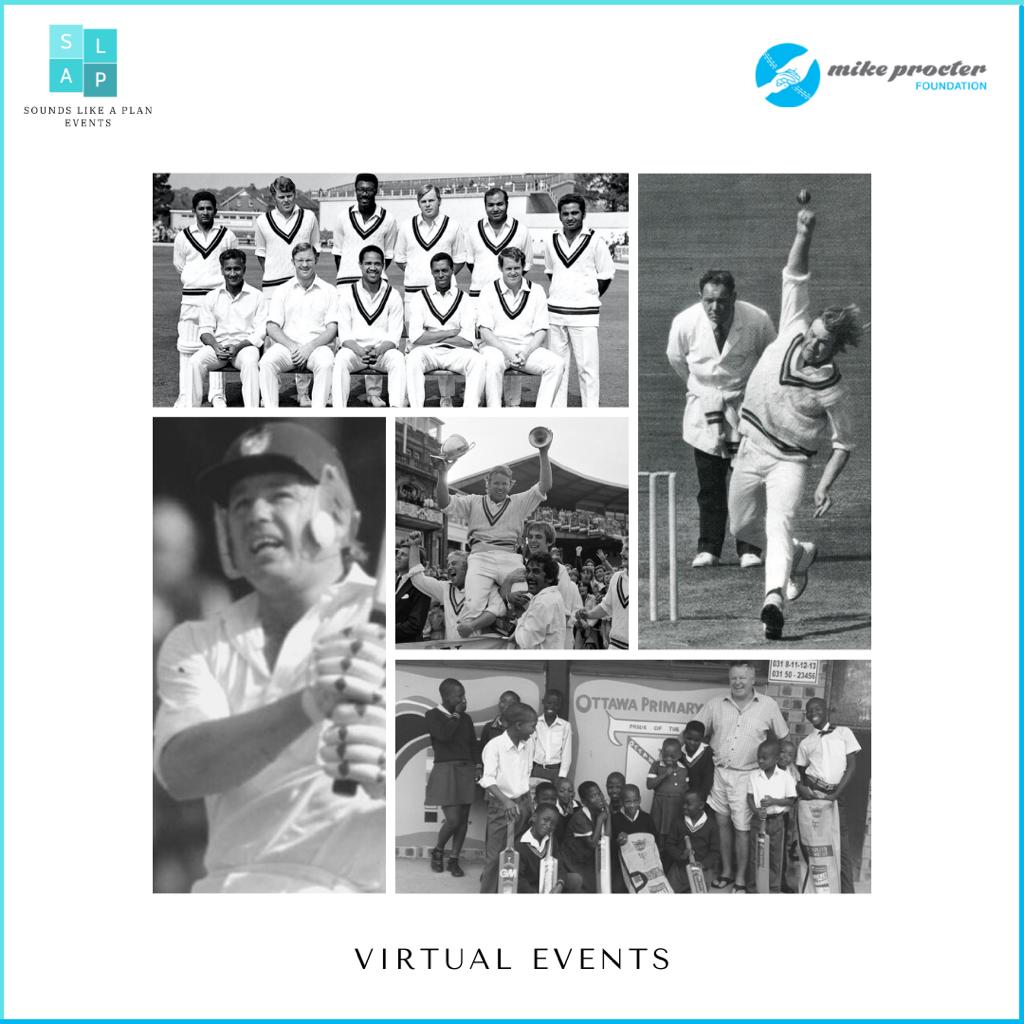 Mike Procter and Barry Richards discuss the early years & the highs and lows of their careers, which led them to become cricketing legends.

Watch Mike and Barry talk through specific highlights of their career in more depth in the recording, which is available live on YouTube. Click here to read more. 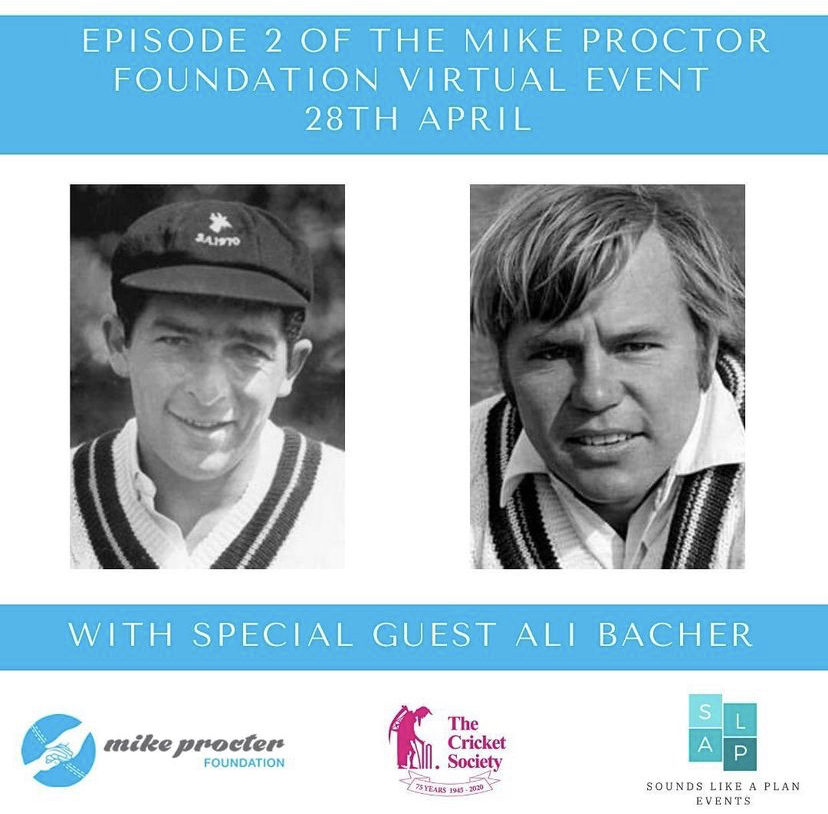 In partnership with the Cricket Society and Sounds Like A Plan Events, we co-hosted the second in a series of talks by Mike Procter in conversation with his friends and former colleagues. The recording from the event can be viewed via this link: https://youtu.be/2ewaau6iogc

The Mike Procter Foundation would like to thank all of those who attended the event and those who made such generous donations to the charity’s work at Ottawa School, including the very generous donation of £1,000 by the Cricket Society. 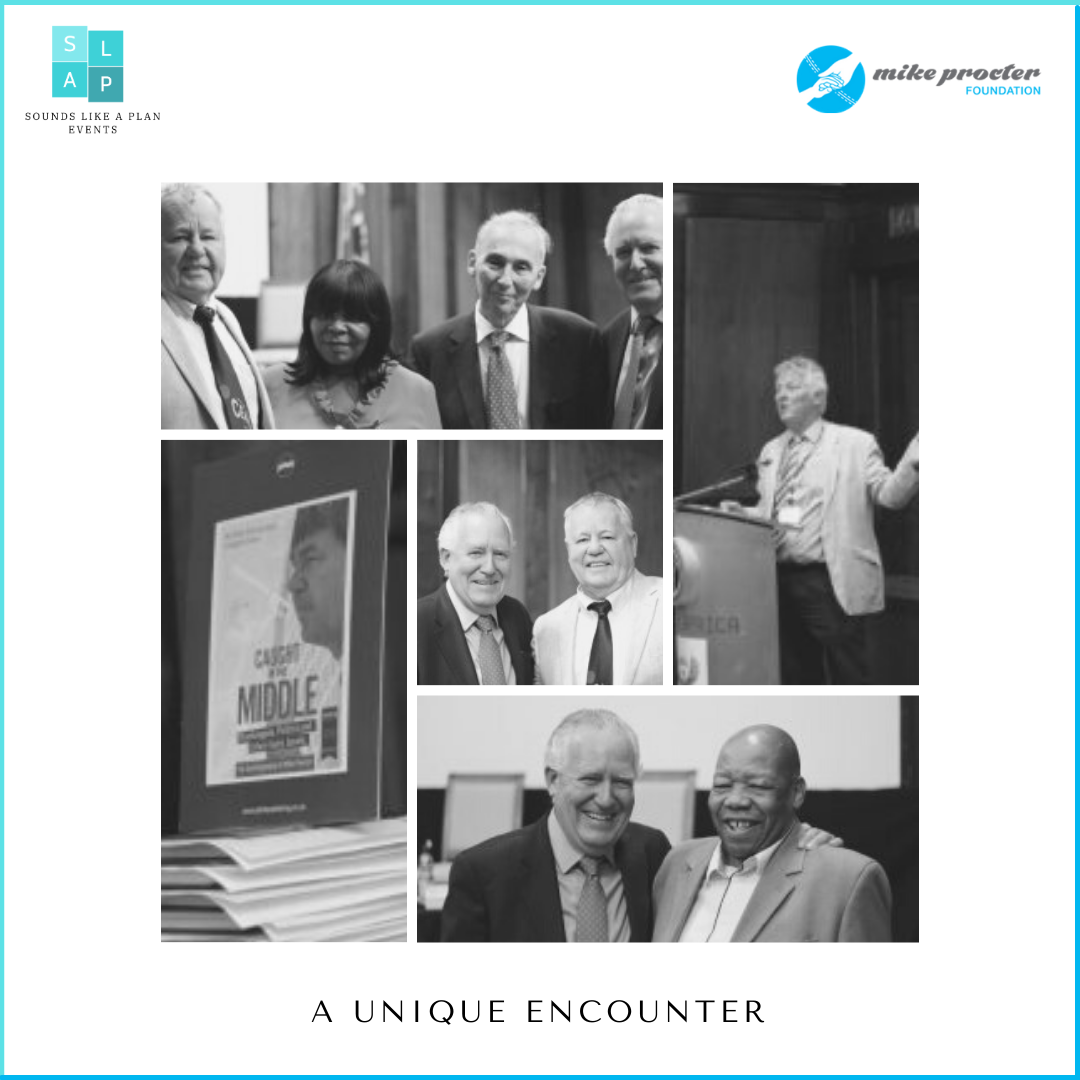 An evening with Lord Peter Hain and Mike Procter in discussion with Sir Nick Stadlen, to discuss the international sporting ban in the 1970s/80s and its legacies for them and for South Africa followed by a Q&A session.

This fascinating discussion and insight into events surrounding the fight against apartheid was kindly hosted and introduced by Her Excellency Nomatemba Tambo, South Africa’s High Commissioner to the United Kingdom of Great Britain and Northern Ireland.

The evening was a resounding success, with over 100 attendees who helped raise a total of £3,000 for the Foundation.