A project to enhance the lives of South Africa’s most vulnerable citizens using cricket and other sporting activities as a vehicle to improve self esteem, escape the harsh realities of everyday life and provide an environment for children to be children.

At Ottawa primary school a significant proportion of the children are HIV positive and many are orphans.  Many face a daily struggle against hunger and crime.

We have been providing physical education lessons and sporting opportunities for the 1,200 children at Ottawa primary school, at Shastri Park in the Phoenix area of Durban since 2011.  We are delighted to announce that in 2023, we have agreed an expansion of our activities into the Solomon Mahlangu primary school at Cornubia, which has around 750 pupils and is located about three miles to the south east of Ottawa school.

How you can help 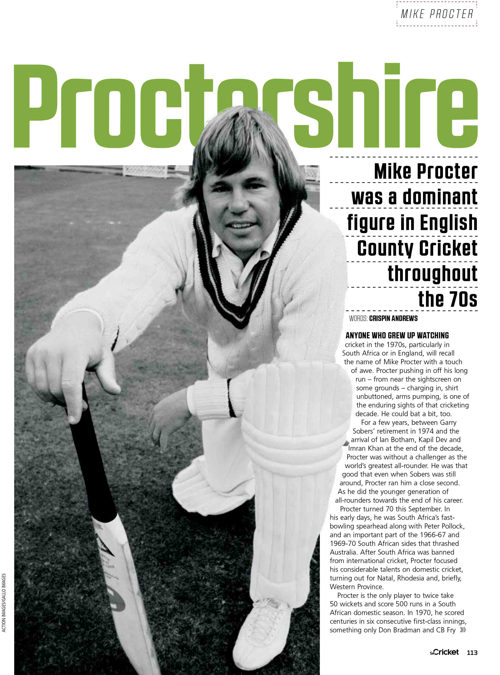 Mike Procter is a South African cricket legend. A fast bowler and hard-hitting batsman, he proved himself a colossal competitor in English first-class cricket. Such was his impact at Gloucestershire, the county was renamed in the popular press as Proctershire!!

Since his retirement as a player he has been South Africa’s team coach (1991-94), national team selector, International Cricket Council match referee (2001-08) and a regular TV and radio commentator and pundit between 1994/2001 and 2016/18). Since retiring, he has also been Director of Cricket between 1988 and 1991 at Orange Free State (at the time that Hanse Cronje and Alan Donald were starting their careers); Northamptonshire (who won the One Day Cup during his tenure); and Natal.

In 2014, he initiated the Mike Procter Foundation to run a project to enhance the lives of the children who attend Ottawa Primary School, in a settlement close to Durban. By introducing sport into their lives he has used cricket as a vehicle to improve self-esteem and an escape from the realities of their daily lives. With many of the children being HIV positive and in some cases orphans they face a daily struggle against hunger and crime; it is, without doubt, one of the toughest challenges Mike has faced.

Caught In The Middle:
The Autobiography of Mike Procter

Caught in the Middle is a look at Procter’s force of will to stamp his mark through county cricket. World Series Cricket also gave him the stage to showcase his full range of skills. In the second half of a lifelong journey with the sport, Procter the coach, manager and selector for the new South Africa was central to some of the modern era’s most iconic and dramatic moments… A compelling read, Caught in the Middle is the fascinating story of a lifelong love affair with cricket.

Get your copy today.

Mike Procter is a South African cricket legend. A fast bowler and hard-hitting batsman, he proved himself a colossal competitor in English first-class cricket. Such was his impact at Gloucestershire, the county was renamed in the popular press as Proctershire!!