Supporting the People of the Ottawa School Community

Many readers will have heard of the rioting and looting in parts of South Africa last month in the wake of the jailing of former President Jacob Zuma, and many will have seen the appalling footage of roads being blocked, lorries on fire and what appeared to be planned and coordinated attacks on shopping malls and other elements of the country’s infrastructure.

Many commentators in South Africa and from around the world have suggested that this was outright insurrection to undermine President Ramaphosa and tantamount to an attempted coup.

Much of the violence started in Zuma’s home province of Kwa Zulu Natal (KZN) and quickly spread to Gauteng and Johannesburg.  As the main city in KZN, Durban was badly affected and this included the township of Phoenix, the area within which Ottawa School is located.  The BBC reported 15 deaths in Phoenix as a result of the unrest but people in the area believe that figure to be much higher.

Inevitably, the unrest and the attacks on infrastructure led to shortages of food and other daily essentials and so the Mike Procter Foundation, in liaison with the Domino Foundation and Hollywoodbets, donated R20,000 (approximately £1,000) towards a food drop to support the local community around Ottawa School.

The distribution of the food took place on Monday 2 August and was a huge success and greatly appreciated.  It prompted a message of thanks from School Principal, Ms Msane who also said, “the smiles on the faces of the little ones was immeasurable”.  The school also issued Mike Procter with a formal Certificate of Appreciation.

The Mike Procter Foundation is delighted to have been able to use some of the generous donations received during the last year to help the community in this way. This was the third such food drop undertaken over the last 15 months.  Mike Procter said, “It is only through the generosity of those people supporting my Foundation that enable us to help alleviate some of the poverty in the area around Ottawa School so I would like to record my thanks and appreciation to all who support and donate to the Foundation.”

Readers may also have heard about communities coming together across the racial and cultural divides that are all too apparent in South Africa, to protect their families and their properties from looters and in some cases, preventing attacks on shops and other elements of the infrastructure on which the communities depend for their provisions and for employment.

A moment of levity during the crisis helped to lighten the grim mood of those manning roadblock barricades set up to protect the local neighbourhood where Mike Procter lives.  Mike was there with a cricket bat when the window of an approaching car was wound down and former Springbok rugby star Gary Teichmann called out “Hey Proccie – how come you’re armed with a cricket bat?  You’re supposed to be a bowler”!! 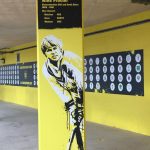 While amusing and definitely lightening the tense situation, it did illustrate a distinct lack of knowledge on Gary’s part as for Gloucestershire CCC alone, Proccie amassed over 20,000 runs in 482 matches (and took 1163 wickets).  He is also one of only three batsmen in the history of cricket to score six consecutive first class centuries, the others being CB Fry in Edwardian times and the great Sir Don Bradman – exalted company indeed.