Caught in the Middle: Monkeygate, Politics

and Other Hairy Issues;

the Autobiography of Mike Procter

To buy your copy, please click on the blue “Add To Cart” button below. After the page refreshes you will see your shopping cart in the column to your right (side of the page). You can also adjust the number of copies you want to buy in the shopping cart. 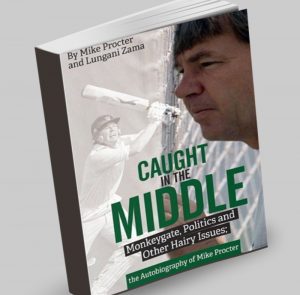 Caught In The Middle, Monkeygate, Politics and Other Hairy Issues
The Autobiography of Mike Procter
£10.00

Caught In The Middle:

Monkeygate, Politics and Other Hairy Issues;

From quaint beginnings on the lush fields of Hilton College, a whirlwind introduction into the Test arena against Australia announced Mike Procter as a serious contender for the tag of greatest all-rounder of all time. Blessed with pace, swing, and a free-spirited nature at the crease, ‘Proccie’ was primed for the biggest stages. But, like the rest of a fantastic generation of South African sportsmen, his Test career was cut short by politics. Caught in the Middle is a look at Procter’s force of will to stamp his mark through county cricket. World Series Cricket also gave him the stage to showcase his full range of skills. In the second half of a lifelong journey with the sport, Procter the coach, manager and selector for the new South Africa was central to some of the modern era’s most iconic and dramatic moments… A compelling read, Caught in the Middle is the fascinating story of a lifelong love affair with cricket.

After selecting the number of copies you want, please click on the yellow “Checkout with PayPal” button. You will be directed to the option of paying via Paypal or using a credit/debit card. If you can not see the yellow PayPal checkout button below, it means your cart is empty. Please click on the blue “Add to Cart” button on the left first. Thank you.

Your cart is empty