During March 2020 Gloucestershire County Cricket Club ran an online Twitter competition to establish who is the greatest overseas player ever to have played for the County. From a shortlist of 16 players supporters and others were able to vote for the players they considered most deserving of the accolade.

We are delighted to announce that Mike Procter was confirmed as the winner of the online poll.  Mike immediately released a short video from his home in Durban that Gloucestershire CCC uploaded onto its Twitter account.  You can view this below:

Following on from his victory in the online poll run by Gloucestershire CCC, Mike has once more been feted as the greatest overseas star to have played for the County, this time in a similar online poll run by BBC Sport nationwide.

Results announced last week showed Mike Garnering 56% of the votes cast in a four-way competition with the West Indies great fast bowler Courteney Walsh (29%) who played for the County in the 1980s and 1990s; the stylish Pakistani batsman Zaheer Abbas (9%) who played in the same Gloucestershire team as Mike in the 1970s; and Australian Ian Harvey (6%) who was at the heart of a later Gloucestershire team that won so many one day trophies around the turn of the century.

Mike was delighted to have won again and thanked everyone who voted for him and the BBC for running the competition. It shows again that while it is many years since Mike hung up his cricket boots, he is so well remembered by cricket fans for the excitement he generated with his swashbuckling displays with both bat and ball. 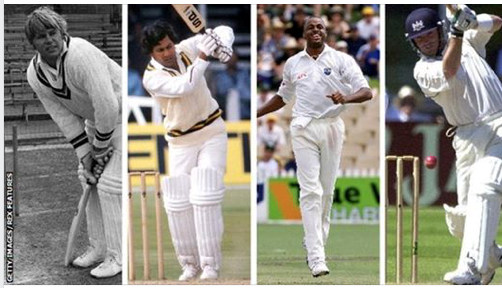 For those old enough to remember Mike in his playing days you will not be surprised by his victory. But for younger cricket followers the best description seen during the last few days of this great all rounder was that he was “the Ben Stokes of his era”. Like Ben Stokes, Mike was a phenomenal competitor and a destroyer of batsmen and bowlers alike, as was seen in the 1977 Cup semi-final between Gloucestershire and Hampshire.